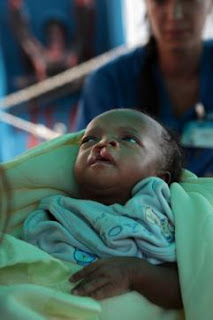 Fatmata, a fourth-grade student, faced some monumental problems that no thirteen-year-old should have to face. She left school to give birth to a beautiful baby boy she named Abdul. The baby was born with a cleft lip and palate. In her native culture, this type of deformity was considered to be a sign that Abdul was a demon child. So, Fatmata’s mother threw them both out of the house. 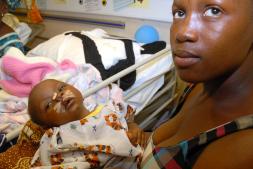 Fatmata had no way to earn a living to care for her child, so she moved in with Mbalu, her wise and loving grandmother. Mbalu offered to help raise the child so Fatmata could continue her education.

Because the clefts made it difficult for Abdul to get all the nourishment he needed, he was not growing as he should. Worried and anxious, Fatmata brought her two-month-old son to a Mercy Ships screening, hoping that the volunteer surgeons could repair his clefts. Little Abdul was accepted for surgery, but since he was underweight, he was placed on the Infant Feeding Program to help him gain enough weight to undergo surgery. 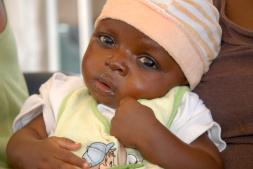 Under the awning of the Infant Feeding Station, Nurse Jessica King, clinical dietician, explained the techniques to properly feed Abdul. He was weighed and measured each week, and he did very well on the program. In a few weeks, he weighed enough for surgery, but Fatmata was not old enough to be onboard as his caretaker. Mbalu was very happy to take on that role for her great-grandson, and Fatmata came also to nurse her son.

The volunteer surgeons repaired Abdul’s clefts, and the difference was obvious on the faces of both the baby and his mother. Finally, they could both smile. Fatmata and Mbalu were delighted. Now little Abdul would have a life free of physical disfigurement and verbal abuse. “Thank you, thank you, we are very happy,” they both repeated. 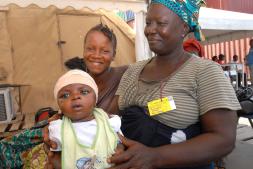 Fatmata hopes to save enough money to go back to school in the fall. “I want to train to be a bank accountant someday,” she confided. In the meantime, she is learning how to be a good mother to Abdul.

Story by Elaine B. Winn
Posted by thefarrells