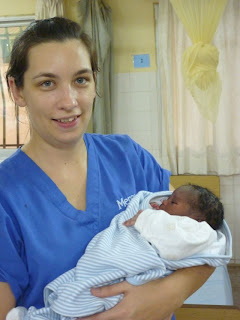 Yesterday was a busy day at work. My first lady in the birthing room had a lovely normal birth of a little girl her Husband said they would call Sarah after the midwife :-)

The next lady was an HIV positive mother having her 8th baby! She complained more than most mothers having their first baby, didn't want to try any of my suggestions as to how we could make things easier for her, vomited all over the baby towels and blankets I had just prepared, kept grabbing my scrubs and my arm in quite a painful manner and finally popped the baby out when I had popped out for a sandwich!! She had been pretty hard work and when I came back she was just sitting smiling, amazing what giving birth can do to transform your behaviour!

I had a couple of antenatal ladies to see, both in their first pregnancy. One probably felt neglected as she was our lowest risk woman and it took time for us to get to her. I confirmed that her waters had broken and admitted her to the ward. She was walking around looking like she was in labour, moaning and bending over, but it sounded more like she had symphysis pubis pain than labour pain. Once the waters have broken we admit women and start an induction of labour after 24 hours if labour has not started. The other lady said she had been feeling some fluid coming out for a few hours. She didn't have a pad (lovely), just a soggy colourful lappa tied around her which made it somewhat difficult to really tell what kind of fluid we were dealing with! A short while later we could see that she was bleeding and that her waters hadn't broken. With no obstetrician Katie, the lead midwife, and I took her to see if we could work out where the placenta was on an ultrasound. So she was an interesting case, working through the APH (bleeding in pregancy) protocol to assess and monitor her given the limitations we have.

Another lady came in looking like she was established in labour. Unfortunately we didn't really want her to be labouring as she was for an elective caesarean section because of a previous VVF (fistula) so we 'rushed' her to theatre - meaning we called the theatre staff from home, sent drivers to get them and then took her. The baby caused us a little trouble, he was a poor colour and seemed a little cold so we warmed him with kangaroo care and gave him oxygen, but later he needed a full resuscitation after stopping his own respiratory effort. We had to wake the mother to warn her that he was doing very poorly and we were nearing the 30 minute cut off, where we have to make the decision to stop resuscitating. There are no ventilators here and so there has to be a cut off as we can not indefinately continue breathing for a baby who is making no effort for themselves. I left at the end of the resuscitation time to go with another lady to theatre, but found out when I returned that the baby had just completely turned around and was back with the mother breathing for itself. Hopefully that is still the case today and the antibiotics have time to work. We pray over the babies as we resuscitate them and we do literally see miracles happen here.

This next lady going to theatre had come in having no fetal movements all day. She was given an initial due date of July 1st and then it was amended to August 11th sometime in the pregnancy. It is so difficult establishing when babies are due here as women don't know their dates and don't come to see us until late in the pregnancy. Often we have to make a clinical guess, which for her was probably inaccurate as she was a 'bigger' lady to start with. Her first baby had died, the second was alive having been delivered by caeasarean section for being very big and 'overdue'. The previous caesarean meant she couldn't be induced using the drugs they have here, there are no CTG's (fetal monitoring) so all factors together - no movements, overdue (maybe), big baby, previous caesarean - meant she went for another one. And it didn't look one day overdue judging by the vernix liberally covering it but we are thankful that she has a live healthy baby.
Posted by thefarrells