what is there to do in the rain?

Answer: Play out in it.

Rainy season is starting and most of the time when it rains it pours. In fact sometimes it is quite spectacular - you look out of the window and you can't actually see anything because the rain is so heavy. It is still plenty warm enough outside, but cools the air slightly that the odd brave person might be seen running on the dock during daylight hours, which would normally be too hot. Today we stayed on board for a rainy day, but the boys did have some fun playing outside on deck 8 this afternoon and then on deck 7 with a glow in the dark frisbee that Sam gave them as it got darker after dinner. It is normally too hot to go outside on deck 8 during the day as there is no shade so it makes a change to go there in daylight! Deck 8 is still a bit of mess and the pool unfinished but there is a track around the outside which they can ride around. Tommy had fun trying to take pictures of jelly fish, but was too high up for any clear shots! 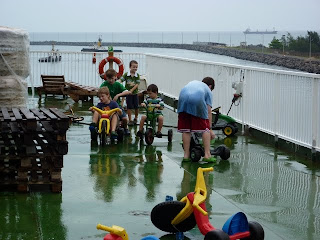