While Josh has a real fever, Tom definately has World Cup fever! We have a wall planner that Tom likes to add the scores to after every match and we have watched quite a few of the games already. Most of the nations who qualified are represented in the crew on the ship which adds an extra spice to many of the games.

It was kind of fun watching England v USA last night with a bunch of people, loyalty split fairly well between the two teams. (Although interesting to see how the loyalties played out in some families - we have US parents with kids who grew up in England and quite a few married couples with one US and one English). It's different to being in a pub with a bunch of England fans, but plenty of facepaint and team shirts to be found :-) 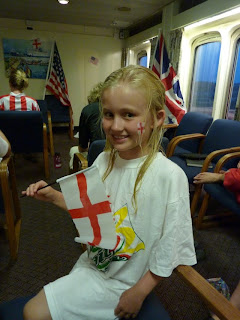 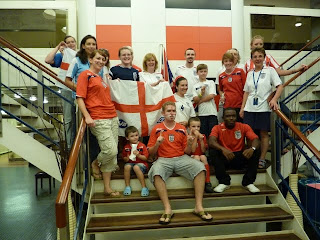 It's times like this that we miss Uncle Sam and the opportunity to remind him of the team for which our great goalkeeper plays for.

Anyway we are enjoying the beginnings of the World Cup here on the ship. Tonight we will join our Australian friends in the hope that our German friends may be dissappointed.