This year's nobel peace prize was shared between three women 'recognised for their "non-violent struggle for the safety of women and for women's rights to full participation in peace-building work", this included Liberian President Ellen Johnson Sirleaf, much respected in this region. http://www.bbc.co.uk/news/world-europe-15211861

Closer to home, here in Sierra Leone there are things happening too. We met actress Eva Mendes this week while we were out shopping for fabric. We chatted about missing coffee and such things, told her a bit about what we are doing here on the Ship (and were called freaking rad, if you change the word freaking to something else). Eva was here filming a documentary on a book called 'Half of the Sky'. Their website says 'Half the Sky lays out an agenda for the world's women and three major abuses: sex trafficking and forced prostitution; gender-based violence including honor killings and mass rape; maternal mortality, which needlessly claims one woman a minute'. A few friends have read the book and really recommend it, so I really want to read it now! It sounds like they are doing some great work.

Today I was invited to the opening ceremony of the free fistula helpline. Women suffering from fistula can now make initial contact by phone, which will result in them coming for screening and hopefully surgery. The hope is that this will be another means of reaching the hard to reach, the women hiding away in shame. Even among the poor in Africa few people are without mobile phones, and most people would know someone to borrow one from for a free phone call.  Her Excellency Mrs Sia Koroma (the First Lady) declared it open after many speeches as well as testimony from one of the patients who had successful fistula repair surgery. It was a good day, not only to celebrate the new phone line, but also to celebrate the work being done here, the hundreds of womens lives that are changed by successful fistula surgery each year. And even closer to my heart, to celebrate the accomplishments of the maternity unit and to know that by providing good maternity care that fistulas are being prevented from occuring. 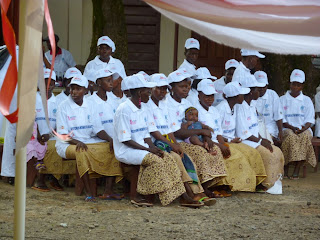 The current ladies recovering from fistula repair surgery were there to join in the celebrations at the launch. A few previous fistula patients are also currently staying at the centre as they approach their due date in a subsequent pregnancy. They are really a testimony for the other women, that there can be hope of a new life.
Posted by thefarrells