The end of September saw another Ethiopian holiday - Meskel.

Meskel is an Ethiopian Orthodox religious celebration said to commemorate the discovery of the 'true cross' by Queen Helena in the fourth century.

(taken from Wikipedia:)The Meskel celebration includes the burning of a large bonfire, or Demera, based on the belief that Queen Eleni had a revelation in a dream. She was told that she shall make a bonfire and that the smoke would show her where the true cross was buried. So she ordered the people of Jerusalem to bring wood and make a huge pile. After adding frankincense to it the bonfire was lit and the smoke rose high up to the sky and returned to the ground, exactly to the spot where the Cross had been buried. One explanation for the high rank this festival has in the church calendar is that it's believed that a part of the true Cross has been brought to Ethiopia from Egypt. 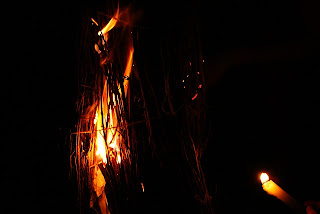 We had our own demera at Bingham with some friends in the car park! 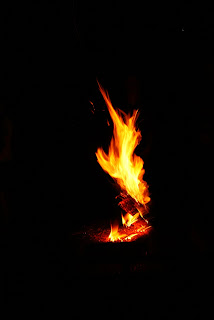 We learned about the Meskel festival, while the boys got to have some fun playing with fire! 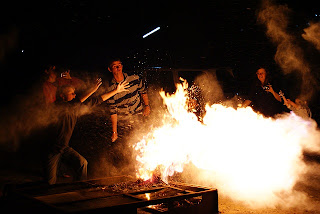 And we learned what happens if you all throw flour at a fire at the same time - not a traditional part of Meskel just boys having more fun playing with fire. If you wish to try this at home, make sure any children (well everyone really) are standing well back - don't worry Mum ours were very safe :-)
Posted by thefarrells