all in a month

It seems that it has been a month since we blogged - helped by not having internet for three weeks in Addis.

So what have we missed blogging about? Probably more than we can mention here - so you might be spared hearing all about end of year reports and other thrilling things like that. But here are the highlights...

December saw Tommy and Joshua's birthdays, the first of which went by with little fuss, the second also fairly minimally, but celebrated with cupcakes at school and being allowed to eat just chips and ice cream for dinner.

Tommy has been coaching the junior varsity football team (translated as under 16s) as well as playing a couple of matches on the Bingham staff team - against SIM staff and against the varsity students (let's not mention the score for that one!). Sarah has been trying to get Christmas shopping done while still in Addis, aware that shopping the week before Christmas in the UK while being the size of a small whale might not be too easy. 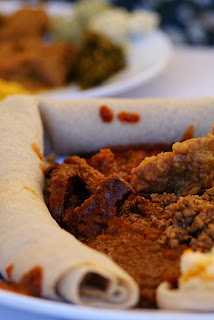 Christmas activities started before we left Addis too - we attended a Gibsha (party) with all the Bingham staff and their families outside in a marquee and a British Christmas pot luck night with friends where someone had managed to bring Christmas pudding back from a recent trip to the UK. 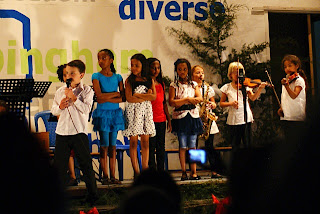 December also saw Tom's solo rap in the Christmas concert accompanied by the Grade 3 class on various instruments, performing a piece that Tom and some friends had written called 'Yo, Yo, Christmas'. Josh did a great job in the Kindergarten nativity as Joseph, performing twice to the rest of the school and once to parents. We all had the entire play memorised by the end of all the practicing but we were very proud of him that the line learning paid off and he did a great job (and if I am honest that he wasn't one of the kids having a small punch up on the stage!). 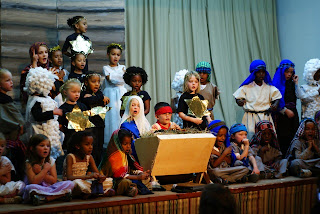 We arrived back in the UK on 16th December and have had a very full week so far. Joshua has enjoyed a family birthday party and the boys were taken to MacDonalds (not quite sure why this is so exciting for children but apparently was a highly desirable outing) while doing their Christmas shopping.

We passed through Cambridge (our Church home town), borrowing our car back, seeing the midwife, nurse and having to pop to the hospital antenatal clinic too. We also went to meet the owners of the house that friends have found for us to rent for a few weeks in the new year. It was not really surprising given the few days we'd had that the midwife told Sarah her blood pressure was too high and she needed to take it easy! (Don't worry Mum - it's settled down since).

We have been catching up with (Tommy's) family in Liverpool the last few days, resting plenty and pottering around the shops starting to collect a few small baby bits. Our next stop is back to Essex (Sarah's family), where we're excited that Sam and Amy (Sarah's brother and sister in law) will be joining us from the USA early tomorrow. We're excited about the time we are able to spend with family and to celebrating Christmas together. We have been incredibly blessed these last months as we have settled in Addis, and feel so blessed by the opportunity to be here for this season and to have our baby in the UK next month too.

We remember the greatest blessing of all this season, the gift of Jesus Christ and celebrate all that his birth means for us. Happy Christmas to all our friends.
Posted by thefarrells