our big boy just got a bit bigger

Tom is now 7 and the memories of nappies and pureed food seem a little more distant. Our little boy now seems pretty grown up.

In case you haven't seen him lately he is crazy about two things - football (soccer) and Star Wars. The love for football maybe comes from his Dad and Uncle Sam and the constant chatter about football through out the season. He loves playing football, watching games on TV and talking about league tables and things that boys seem to do. His love for Star Wars probably comes from the bigger boys on the Ship and their collective love of Star Wars Lego. He has a slowly growing collection of themed Lego and seems to have a fairly good grasp on the Star Wars story considering he hasn't watched most of the films! 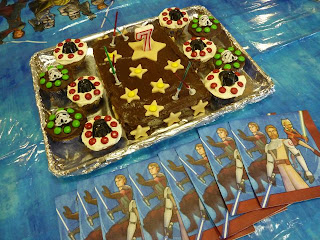 We had a vaguely Star Wars themed party yesterday, the idea being that the kids would complete various games presented as Jedi training exercises. The reality of course, was a little more chaotic than I had planned but a lot of fun. Tom was quite sure that they all needed to practice fighting with lightsabers, so we compromised and said the last game in the training could be using the lightsabers to keep balloons in the air. 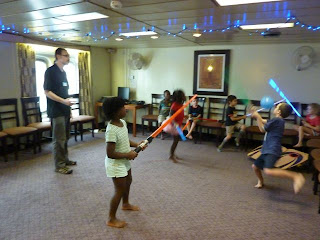 Today he has started the day with chocolate shreddies, a treat sent from the UK and then opening his presents. Josh was just as excited as Tom while he was opening the presents, they squealed with excitement at star wars keyrings, t'shirt and lego, talking about who all the characters were (I'm still none the wiser but feel like the day is getting closer when I will have to educate myself and actually watch the films to know what they are talking about)! He is a very lucky boy with some very kind family - thank you!! I took some pictures, but I should have taken a video, he was just so happy and overwhelmed and full of thanks, it was lovely to watch him. 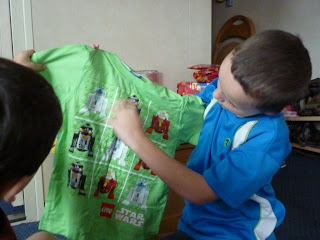 The rest of the day will apparantly be full of building lego, wii football, games and football. Oh and a little bit of eating chocolate cake with our friends, Uncle Sam and Auntie Amy :-) Sounds fun.
Posted by thefarrells