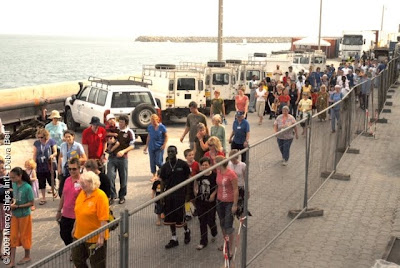 Every other Thursday we have fire drills, on the first/crew alert alarm the fire team heads for wherever they are told the fire is. On the second/abandon ship alarm we all have to leave the ship and muster on the dock. We all have to confirm that we are there and not burning to death on the ship and then they make sure that everyone is accounted for. They never are, usually there is someone caught in the area of the fire or something so then they make announcements that start with 'if anyone knows the whereabouts of the following crew members please phone the bridge...'. And then we wait, usually for up to an hour, sometimes longer, while they put out the fire and the emergency medical team has to deal with whatever scenario they are given etc.

Yesterday was our last 'in port' fire drill for 2009, we now start having 'at sea' drills so everyone is prepared for sailing. The pre-school are going to be spending some time practising putting their life jackets on and off soon so they don't get frightened by the drill.

Richard has some great pictures of what happens inside while we are all mustering on the dock...