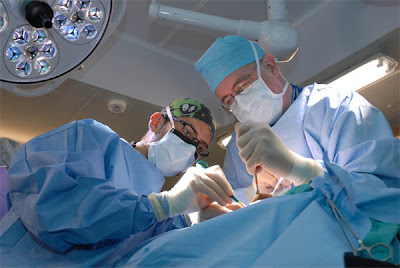 This is the last week of surgery to allow patients a little time to recover before the hospital closes at the end of the Benin 2009 outreach. The hospital then has to be cleaned and tied down ready for sailing.

Here is an article written by one of the communications team Megan Petock about the Operating Rooms on board...

For thousands, the 60-second walk down the long hallway which runs through the Africa Mercy has been the final leg in a long quest for physical, emotional, and spiritual restoration. At the hallway's end is a pair of sealed doors which lead to a state-of-the-art operating suite, filled with teams of nurses and surgeons. Every day patients walk through the sealed doors, crossing a threshold of transformation, to receive life-changing free surgery.Over five thousand surgical procedures have already been performed on the Africa Mercy during the 2009 Field Service in Benin.Surgeries performed onboard include orthopaedics, maxillofacial, plastics, general, vesicovaginal fistula repair (VVF), and cataract removal.

The Africa Mercy has six operating theaters, predominately staffed by short-term crew who come from around the world to share their expertise with the forgotten poor. "Everyone stays for a very short period of time. Our entire operating room team consists of 50 people, and only five of us are long-term staff," said Operating Room Supervisor Alison Brieseman. "We bring in people who know what they are doing, so we can have a higher turnover. Short-term people come in, they scrub up, we point them towards a table, and they are fine. If you can work in the OR in one country, you can work in the OR anywhere else. " The Africa Mercy operating suite is a diverse and dynamic environment which Alison Brieseman thoroughly understands. She has served with Mercy Ships for five years. She first worked as an operating room nurse and has held the position of Operating Room Supervisor since the inauguration of the Africa Mercy in June 2007."Somehow it (the OR) work when it really shouldn't. People come from everywhere, and they all know different things. They speak different languages and do things different ways. The staff is constantly changing; everyone is new all the time. You would think there would be a really high stress level and that people disagree about everything. But it's just not like that. It's a fun place to be. It's a real testimony to the grace of God," said Brieseman.

For most of the 2009 Field Service in Benin, the OR has run at full capacity, utilizing all six operating rooms and maximizing the number of patients served."Recently, I was going over the statistics from this field service.Compared to last year, by week 21, we had doubled the amount of procedures performed. So, many more people have received surgery. It's been a really exciting outreach," said Brieseman. She attributes this increase to better staffing and a more efficient use of resources. A major accomplishment of the OR during this field service has been the successful training of three Benin nurses in operating room procedures. "At the beginning of the year, they were registered nurses but had never worked in the operating room. One of our long-term OR nurses, Glenys Gillingham, has been working with them throughout the field service," said Brieseman."Now, they all scrub, circulate, and inject anesthetic into the eye. They are now teaching the short-term staff what to do. When new staff comes, the Benin nurses are saying, 'This is what you do,' and 'Come here; I'll show you.It's really great to see. We've never trained local nurses, and it's been one of our coolest achievements."

For many years to come, the OR suite on the Africa Mercy will continue to be a place of healing and transformation for thousands of individuals. As the OR staff continues to grow in statistics and achievements, the focus of their work is still to impact the lives of individuals. Brieseman saw a poignant example of this principle earlier this year."During our last round of VVF surgeries there was a debate about whether we should perform surgery on the last patient of the day. It was already 4 p.m. and if we did the case, we knew we wouldn't finish until 7 p.m. or 8 p.m.Everyone had just worked the past three days and three nights and was exhausted. As we stood around discussing it, someone just went, 'All right, that's it; we are doing it. I remember standing at the door, watching this patient waddle down through the hallway holding her gown. I saw her back, and it was all wet. We could have ended on time and had our dinner, but she would have stayed wet in her bed. Instead, her life was going to be transformed. There were three or four of us standing there saying, 'I'm really glad we made that decision.