...was the school play last night, which would have blown you away, had you been here braving the big swells with us. The children have spent the last week singing, acting, dancing, producing sets, costumes and publicity. They should be so proud of themselves, it was fantastic, properly FANTASTIC. Having a school with all ages does provide a nice mix of the small and cute with the bigger and talented making an all round brilliant performance. The play was loosely based on the film the Polar Express, but the children on this train rode to Bethlehem to discover about Christmas, ending at the nativity. All the bigger children started on the train in their pyjamas and then did a bit of dancing. Tom got off the train at an earlier stop to be able to go and change into his Kings outfit. We were really proud of him, he had about as much rhythm as either of us would have had trying to dance, but gave it a good shot! Josh had never been totally convinced about the idea of being a sheep, preferring the idea of being a lion or helicopter in practices. He wasn't any more convinced in the actual performance having been trying to fall asleep on my lap while watching the start of the play, and continued his stance of 'i don't want to be a sheep' throughout. I think he really wanted to be big Josh as the conducter, he keeps standing on the sofa shouting 'all aboard'! Kind of funny that after the 'i don't want to be a sheep, i dont want to be a sheep' last night,  today it was all 'i want to be a shepherd, i want to be a shepherd'. 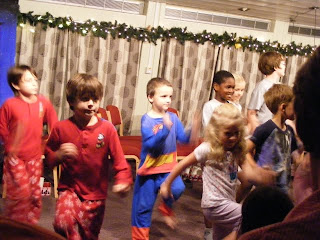 Tom dancing in his pj's 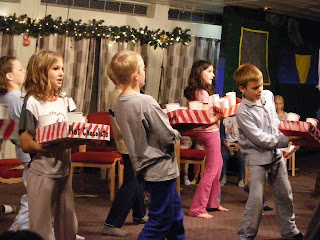 Ok so most of my pics were blurred, so if I get any good ones I'll add them, dancing children on a moving ship is not the best combination for crisp photography, at least not with my camera!