Tommy's sister Ann has been to visit us for ten days and spent Christmas with us. We have made the most of having a car for a bit, spending time with her and seeing lots of the local area and beyond too. It has been fun having her here and we enjoyed showing her the Ship on Christmas Day. We have visited waterfalls, museums, the Drakensberg mountains, some battlefields and went for a game drive (which was one of our Christmas presents :-) ) and where we saw a rhino with a tiny baby and a herd of 20 elephants with babies amongst the much more common zebras, kudu, impala, wildebeest etc. 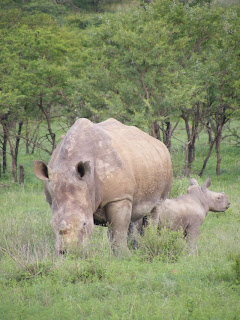 Tom enjoyed hiking to the bottom of one of the waterfalls and talking the guides ear off about all the countries he has lived in - 'where are you from?' is not such an easy question to answer when you have lived in 5 countries in a few years of life. Josh enjoyed seeing the injured cheetah in the Boma in the game reserve and when the safari vehicle got stuck in the mud so that we had to be towed out and the guide got covered in mud. There were tons of antelope, zebra and wildebeest in the reserve where we stayed a couple of nights, we heard there were giraffes too but hadn't seen them until we were leaving and Tom shouted that he could see giraffes. We could see two at the top of the hill, but later Tom said he had seen two and a baby, which we didn't believe until we saw our pictures which clearly show them all! 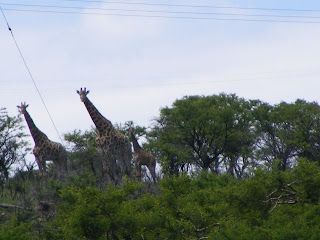 The Drakensberg Mountains were stunning, they looked like green carpet laid over the mountains and there were small waterfalls in every direction. We walked, found worms and photographed flowers and enjoyed the beauty of the mountains. 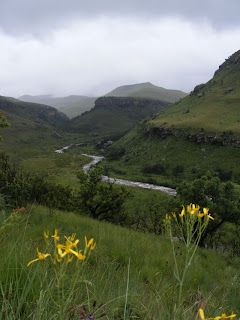 One thing that worked really well for our boys was borrowing cameras from some friends so they could take their own pictures. This kept a four year olds interest when you take him to three different waterfalls and on a 4 hour game drive. He enjoyed clicking away even though he was so tired by the end of the game drive he was clicking the button and holding the camera in one direction while looking at the elephants on the other side of the vehicle! -a bit of a shame as our camera is broken and the old one we took didn't record most of the pictures we took :-( 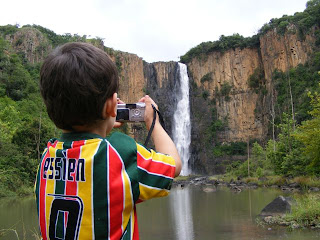