Some of the children on the summer programme visited the Maison de l'esperance today. This is the place we mentioned was making the croissants in a post a while ago. We were given a tour round and heard that the women are given a choice of learning bakery, patisserie, kitchen (general cooking so that they could work in restaurants) or soapmaking. The women also receive some education including basic French to use on the market to be able to sell their produce. While some of it was a little more than the little ones could really comprehend - how some of the women are as young as 14 having to survive alone, some sleep there as they have no where else to go, they enjoyed being involved with making some soap with the lady that was teaching which they have brought to the ship to wait for it to harden up and turn into soap! They also enjoyed being able to purchase and sample some of the things we had watched them baking!! 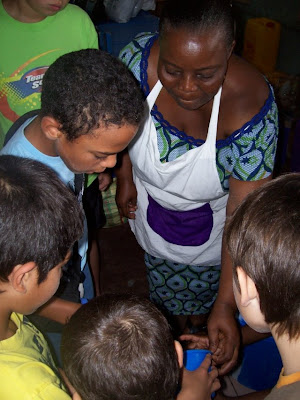 Here is the soapmaking in action...honey soap!!