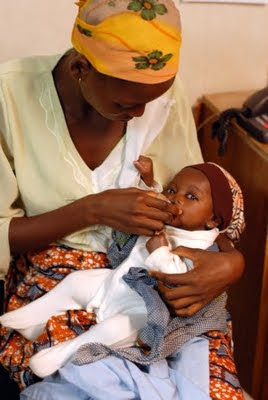 Amitatau was extremely underweight when she came to the Africa Mercy. At four weeks old, she weighed only 2.3 kg, just half the average weight of babies her age. Amitatau’s uncorrected cleft lip and palate had made nursing difficult for her. As a result, she was starving.

Babies with clefts often have trouble feeding. The malformation of the mouth makes it difficult to forcefully suck, making it difficult for the baby to get enough milk. “It can be very difficult to feed babies with clefts,” said volunteer nurse Debora Saur. “Because of the hole they have in the mouth, the milk can come out of the nose. Mothers particularly have trouble breastfeeding because it’s hard for the babies to create suction. The moms and babies can really struggle.”

Breastfeeding mothers can also lose their ability to produce milk if the baby isn’t nursing properly. If this happens, some moms will attempt to feed with formula. However, many can’t afford to buy the amount of formula necessary to ensure proper nutrition. Often, the formula is watered down, and the baby does not receive the nutrition needed to develop and grow. Without intervention, these babies can die.

Amitatau’s mother felt helpless and alone when she brought her daughter to the Africa Mercy. After the baby was examined, it was determined that her clefts were correctable. However, she could not safely receive surgery until she gained weight.

Fortunately for Amitatau, Mercy Ships runs a feeding program specifically designed to help babies with clefts gain weight. It is operated by Debora Saur, who is from Germany. This is the second field service during which Saur has run the program.

The feeding program gives mothers the educational and physical resources needed to ensure their babies maintain an adequate nutritional intake. Babies typically stay on the program for three to eight months before surgery.

Initially, an appointment is scheduled on the Africa Mercy with Saur, and the needs of mother and baby are assessed. “They come, I weigh them, and I teach them how to feed the baby. I also explain why it is important for the baby to eat regularly,” said Saur.

Every two weeks, mothers come to the Africa Mercy to receive formula. During every visit, the baby is weighed, and the weight is documented on a growth chart. Additionally, Saur provides emotional support to the moms. In many West African communities, babies with clefts are often viewed as cursed, and mothers are encouraged to abandon them. This worldview can further compound nursing difficulties and leave mothers feeling very alone.

“Often the community will think the baby is cursed because it is born with something that is not normal. It can be very difficult to for a mom to live in her community with that pressure,” said Saur. “I think it’s important for them to know that someone cares, and there is a place that they can always come to – they are not alone. I think it makes a difference.”

Already, Debora has seen several babies successfully gain weight and receive free surgery. “Last year I had a baby in Liberia who came at the beginning of the outreach. She was really small when she came. After going through the feeding program, she was able to have cleft lip/palate surgically corrected. It was really exciting,” said Saur.

The feeding program will continue throughout the duration of the 2009 Benin Field Service.