This weekend we drove past the Mandela Monument: 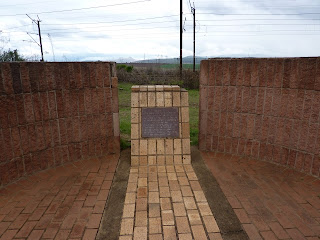 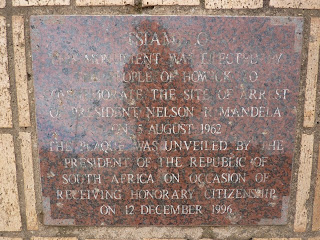 The Mandela Monument, located in KwaZulu-Natal South Africa is a small representation of monumental proportions...it is the only known monument to a criminal arrest.
This is where, on August 5, 1962, Nelson Mandela was arrested. He would later be imprisoned on Robben Island. On December 12, 1996, the people of Howick conferred the Honorary Freedom of the town on President Mandela.
Nelson Mandela was driving past Tweedie with MK member Cecil Williams when he was apprehended by the police. From Mr Mandela's autobiography, A Long Walk to Freedom: “I knew in that instant my life on the run was over. A policeman introduced himself as Sgt Vorster of the Pietermaritsburg police. He asked me to identify myself. I told him my name was David Motsamayi. He nodded and asked me a few questions. Then he said: “Ag, you’re Nelson Mandela and you are under arrest.”