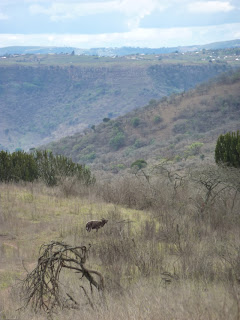 We had a fun weekend with friends visiting a few places nearby. By nearby I mean only an hour and a half away as there is not anything much less than an hours drive. On Saturday we split up for most of the day to do some different things, Miriam and Amy went up the Sani Pass into Lesotho, Sam and Tim played golf in the rain and we went to the Lion Park, World's view and candle dipping on the Midlands Meander. While Tom had wanted to see crocodiles in South Africa, Joshua wanted to see lions. As well as hyenas, wildebeest and whatever else is in the Lion King movie. Natal Lion Park is somewhere between a game park and a zoo, the lions being in an enclosure at the end that you drive into. You pay less than £10 for your car and it's passengers to drive around the park. It was about an hours drive and we saw zebra, many types of deer, birds, african cows and got to say hello to the resident elephant. The scenery is spectacular as it is pretty much everywhere around here. We got to drive next to the lions, but kept moving after seeing them knawing on the tyres of the landrover in front of us!
Posted by thefarrells

wow sounds amazing! pity not to stroke the lions though?
love nanny x