“ Thank you, Mercy Ships. Now I came back to life ,” said a jubilant Jean Loko.

For 18 years, this 60-year-old tailor had been dealing with a tumor that grew in a double row, curling like an inflated collar around the back of his neck and down his back. It forced his neck and head to stretch forward, impairing his balance. He found it difficult to walk. With stark simplicity, he stated, “I was afraid I would die.”

In 1992, Jean was caught in a battle between opposition and government forces on the Cotonou Road in Benin. The soldiers began beating the people, and Jean tried to run away. But a soldier hit him on the back with a bat, causing a wound that began to swell. And the wound kept growing. 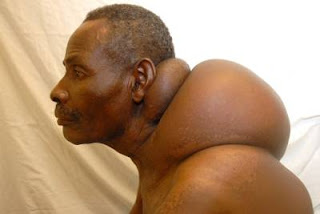 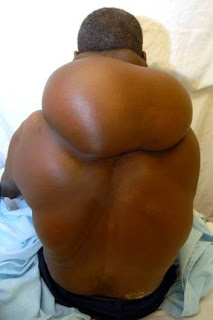 Medical care in Western Africa is limited. The local hospital told Jean that they could not help him.

Jean tried to continue working, but his range of movement became more and more limited. He could not cut and sew the fabric of the garments without constant pain. Soon, he could no longer run his business, so he had to abandon his only source of income.

Jean also had to battle the cultural aversion to deformities, which were seen as a curse. The father of seven, Jean was rejected by his two oldest sons because of the growth.

All Jean could do was sit in his house. There was no joy in his life.

Then he heard a radio ad that brought a glimmer of hope. A Mercy Ships team was coming to hold a medical screening near his home. Although he was a little fearful that he would meet disappointment again, he went to the screening anyway. “But I was chosen!” he said with a combination of surprise, disbelief and elation.

The volunteer doctors aboard the Africa Mercy successfully removed the tumor that had caused him so much misery. When he realized the growth was gone, his usual sombre expression turned to a brilliant smile. “I just thank Mercy Ships for what they have done for me. They gave me my life back.” 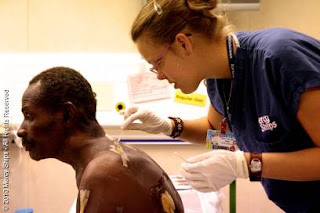 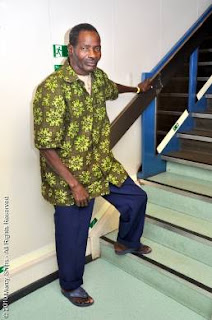