Rikiata was one of the women in the first of the 2010 VVF dress ceremonies - the celebrations that we have when women are leaving us to go home, no longer leaking urine. The first women pictured below I got to know well through teaching and craft work, Rikiata helped us translate for some of the other women. They were a lot of fun, watching them get ready for this dress ceremony was an honour and filled with much hilarity. I hope you like the fabric - a few of us went to the market to buy the fabric when we were getting the beads for their necklaces. Below is an article written by the communications department: 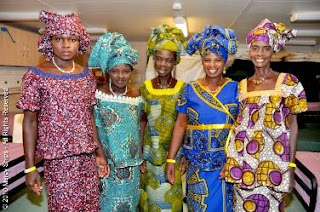 Rikiata is a spirited and capable woman, full of good humor and common sense. The mother of four children ranging in age from 6 to 17, she discovered almost two years ago that she was pregnant again. Although she had a C- section in the hospital, her baby died, and she was left with a vesico-vaginal fistula (VVF). This is a very common problem that occurs in poor countries where medical assistance is very limited or inaccessible. The injury is caused by prolonged or difficult labor. Often the mother is too small or too young for unassisted childbirth.

VVF results in incontinence. The constant leakage of urine soon destroyed Rikiata's trading business and her life. So, she went to visit her mother and stayed there.

Rikiata knew about Mercy Ships and called to see about a screening, but at that time the ship was in Benin. When the Africa Mercy came to Togo, the doctor called her and told her that she should come to a patient screening. Mercy Ships provided transportation for Rikiata and several other people from her village in northern Togo.

In just a few days, her life was dramatically changed! Her surgery was successful. During her recovery time in the ward, she was a great help as a translator because she knew the languages of the northern part of the country. Overjoyed that she was dry once again, at meal time she would say, “When they give me food, I tell them I am already full of happiness.”

All the women who have had a successful VVF surgery participate in a dress ceremony in the ward. They are each given a new dress and a chance to share their testimony. The drums begin, and the singing and dancing follow, as the ward echoes with the joyous sounds of happy women celebrating the return to a normal life.

Resplendent in a royal blue and gold dress and matching head-wrap, Rikiata led the group into the ward. Her brilliant smile reflected her great joy as she gave her testimony, “I wake up dry. I am overhappy! I can start my business again . Even my children are happy!” 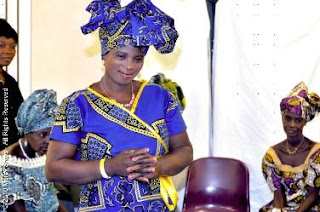