Since we arrived in Benin there has been a small boat half sunk a bit further down our dock. Tom has named it 'The titanic' and was fairly convinced that it must have hit an iceberg until we gently reminded him about the heat and lack of ice here. We went to look at it again as they have tied it up to something we thought might have been trying to get it out of the water, but they don't seem to be getting very far if that is what they are trying to do.

Tom is also concerned that if we sink we will be eaten by killer whales, although remains keen to see some more on the next sail!! We have been talking about him asking God to help him not be afraid each time he worries about the killer whales (and that killer whales are not found in the dock and eat mainly seals). 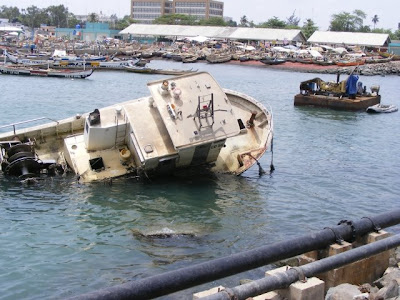